If you don’t know the name of the person who cleans your office, you might need coaching on leadership 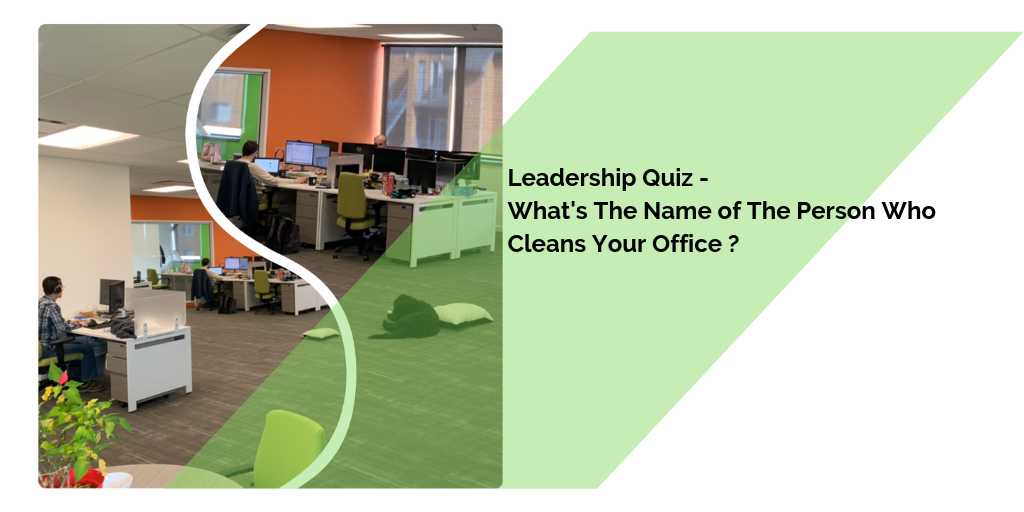 I recently read an article in the New York Times featuring an interview with Walt Bettinger, CEO of the Charles Schwab Corporation. Mr. Bettinger shared a meaningful lesson learned in his college days that captured what he has found to be one of the most important aspects of leadership: the human aspect. From the article:


A business strategy course in my senior year stands out. I had maintained a 4.0 average all the way through, and I wanted to graduate with a perfect average. It came down to the final exam, and I had spent many hours studying and memorizing formulas to do calculations for the case studies.


The teacher handed out the final exam, and it was on one piece of paper, which really surprised me because I figured it would be longer than that. Once everyone had their paper, he said, “Go ahead and turn it over.” Both sides were blank.


And the professor said, “I’ve taught you everything I can teach you about business in the last 10 weeks, but the most important message, the most important question, is this: What’s the name of the lady who cleans this building?”


And that had a powerful impact. It was the only test I ever failed, and I got the B I deserved. Her name was Dottie, and I didn’t know Dottie. I’d seen her, but I’d never taken the time to ask her name. I’ve tried to know every Dottie I’ve worked with ever since.


It reminded me of the following incident involving Raoul, the gentleman who cleans our offices at SBX.


We moved into new offices a few months ago to accommodate the growth of our company. During the move, I made it a point to ensure that the office was designed to emanate a warm, welcoming environment for our team and customers. I worked closely with a company that designs state-of-the-art workstations. They painstakingly consider every detail: design, dimensions, ergonomics, colors, materials. Even the color of the power outlets at the desk were carefully evaluated. We felt the result was perfect. Or so it was until we got Raoul’s feedback in an unexpected way.


One Monday morning, after a restful weekend, we came in to the office to find Raoul had made some changes to our environment. At each of our desks, a small plastic hook was fastened in various locations. Our headsets which were originally lying around our desks were now neatly hanging on those hooks.


The hooks were placed randomly on the desk dividers, of different sizes and in colors that didn’t match the workstations. They stuck out in our new perfectly proportionate and color-matched office design, but the purpose they served was so apparent. A better organized desk was easier to clean.


In addition to the hooks, we also noticed the computer cables that were supposed to be neatly tucked away by our engineers were no longer hanging onto the floor but taped to our computers. While this was less than ideal visually, the purpose served was apparent once again: keeping the cables off the floor made the floors easier to vacuum and maintain.


I confess I was a bit angry at first, seeing my perfect design butchered by these visual imperfections. That is until I realized that what Raoul was really doing. He was simply doing his part to contribute to the rest of the team and its work – he was being a good team mate, as he had always been.


When Raoul takes a few days off to visit his family overseas, he always comes back with homemade or local goodies and places them on the kitchen counter for all of us to enjoy. One time, he even got me a box of exotic tea after noticing the tea-inspired novelties on my desk.


After reading all of this, it might surprise you to know that I seldom see Raoul in person. Our schedules rarely cross over such that we can meet.


Regardless, I am proud to know him by name and I consider him an integral part of my team.